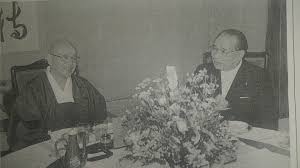 This week, we wrap up our look at Soka Gakkai with the history of its split from Nichiren Shoshu. Plus, we take some time to look at the various controversies surrounding the group and what they say about Soka Gakkai’s position in Japanese society.

Metraux, Daniel. “The Dispute Between the Soka Gakkai and the Nichiren Shoshu Priesthood: A Lay Revolution against a Conservative Clergy.” Japanese Journal of Religious Studies 19 No 4 (December, 1992).

McLaughlin, Levi. “Did Aum Change Everything? What Soka Gakkai Before, During, and AFter the Aum Shinrikyo Affair Tells Us About the Persistent ‘Otherness’ of New Religions in Japan.” Japanese Journal of Religious Studies 39, No 1 (2012).