In the Soviet Union, snitches got statues. But was the story of a brave little Communist who was murdered by his own family just a little too good to be true? And if the famous campfire tale was a fabrication, who really killed the Morozov boys?

Content note: This episode contains descriptions of the murders of two children, torture of suspects, execution by shooting, and millions of deaths due to famine.

Featured image: A bust of Pavel Morozov in Kaliningrad. The star-shaped logo with Lenin’s profile is the symbol of the Young Pioneers organization. I slightly misspoke about monuments to him in the episode–while the bronze statue that Gorky advocated for in Moscow has been torn down, some monuments to Pavel are still standing. (Image source) 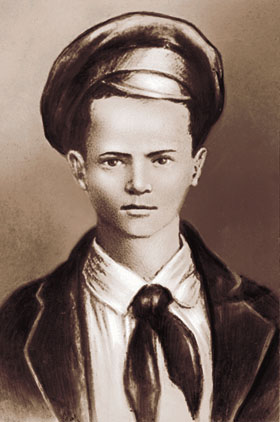 Pavel’s official “photo” portrait. This has been heavily and not at all expertly retouched to portray him as a Young Pioneer in the uniform that the public would have expected him to wear, although he would not have owned this uniform and might not have been an official member of the Young Pioneers at all. (Image source) 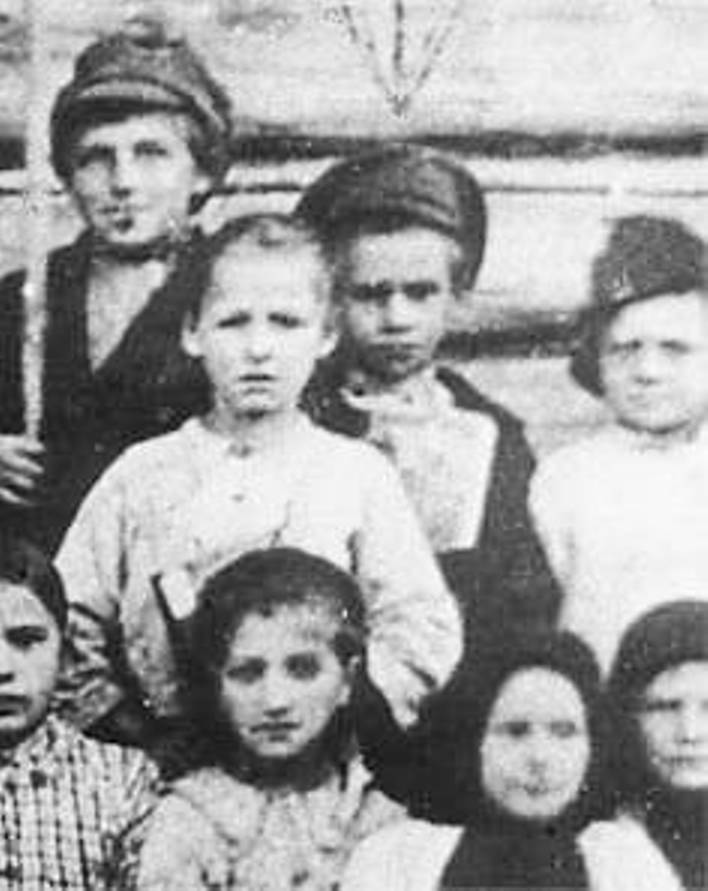 The photograph of Pavel that Soviet portrait artists were working with. He’s in the center. (Image source) 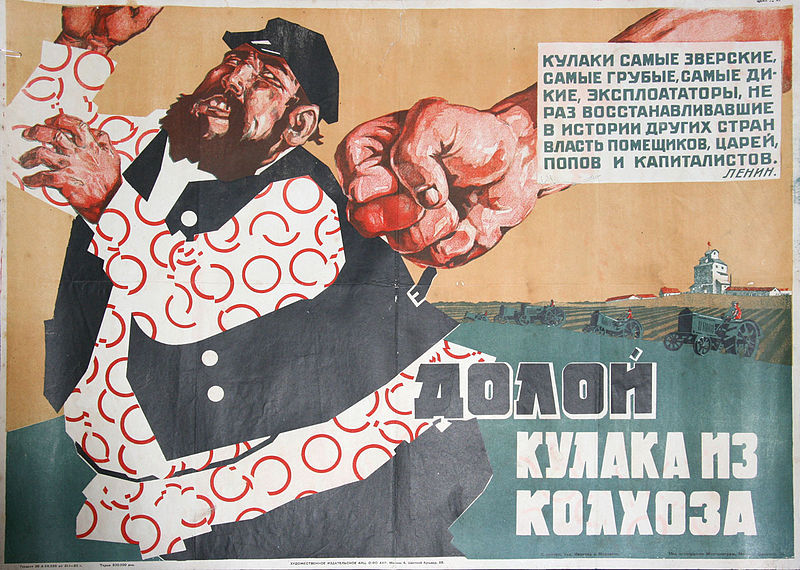 A propaganda poster showing a kulak being driven out. (Image source)

A guide to the different categories of peasants published in the 1920s. The poorest peasants, the bednyaks, are up top with their very simple house and minimal possessions. The richest, the kulaks, are at the bottom with their livestock, farm equipment, and nicer house. (Image source)

A photograph of the monument to Pavel in Moscow. You can see a picture of what that monument looked like after it was downed in this article. I’m not sure what happened to this particular statue after it was torn down. (Image source) 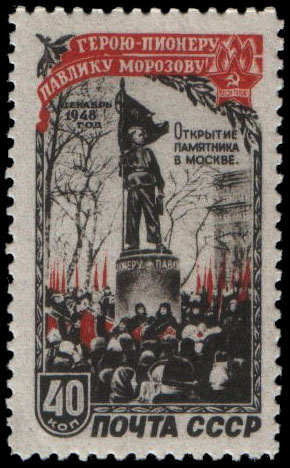 A stamp from 1950 depicting a Pioneer rally at the Moscow monument. (Image source) 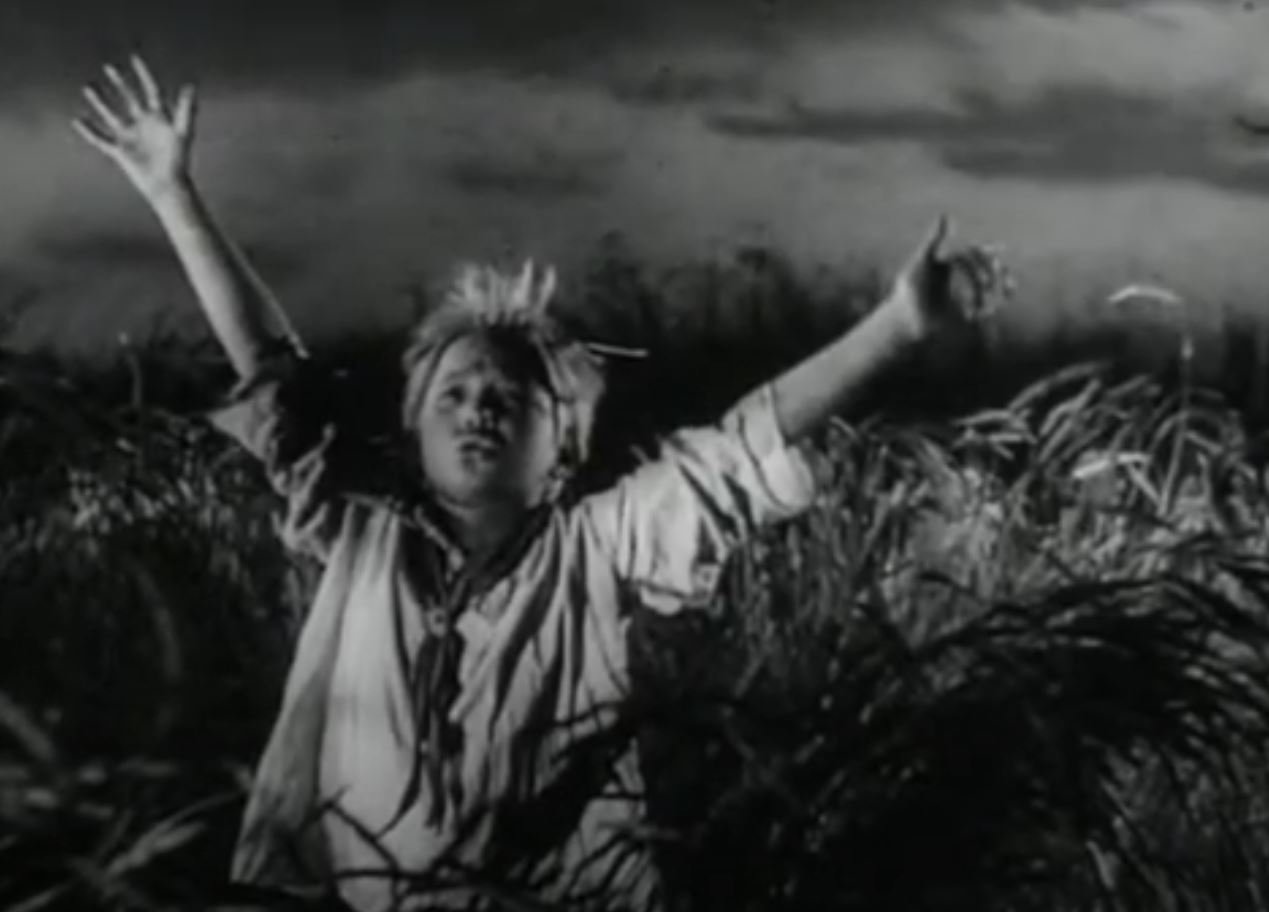 A scene from Behzin Meadow, an early attempt to fictionalize the Pavlik Morozov story. You can watch more of the movie here. Stalin apparently really hated this film, and it turned into a mess due to reshoots and meddling from political officials.

Pavel’s mother Tatiana meeting with Young Pioneers in 1953. Her story after the deaths of her sons is complicated. She did benefit from her celebrity status to some extent, but may also have felt that she needed to rely on continuing to tell a particular version of the story to keep up the support or to avoid punishment. (Image source)

Young Pioneers read a bulletin board featuring “Pioneer Heroes.” I’m not sure if Pavel is on this one, although the picture on the bottom left looks a bit like his official portrait. (Image source)

A monument marking the spot where the Morozov family’s house once stood. Catriona Kelly noted in the early 2000s that the monument was in pretty poor repair. (Image source)

Artists recording “Pavlik Morozov Superstar,” a parody of Jesus Christ Superstar, in the 1980s. Their taped recording became an underground hit and was distributed by fans. To conceal their real names, the group went by the name Levinson’s Humanism. (Image source)

A performance of Pavlik Morozov Superstar from 2018. The arguments going on in the comments of the original Youtube video are giving quite a few interestingly different versions of what they believe the real story of Pavel’s death was supposed to be.

Pavlik Morozov, a song by Crematorium, portrays Pavlik as a kind of evil spirit traveling through history to sow discord.

1 thought on “The Murder of Pavlik Morozov”