This week, we’re beginning a month on radical activism in the 1960s with a look at the student uprisings of 1968. Today is all about where those uprisings came from, how they’re related to the “two Zens” of the 1960s, and the specific example of the University of Tokyo, where a debate about student medical internships turned into a violent and bloody battle between leftist student groups.

Kapur, Nick. Japan at the Crossroads: Conflict and Compromise after Anpo. 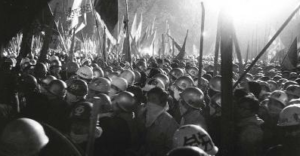