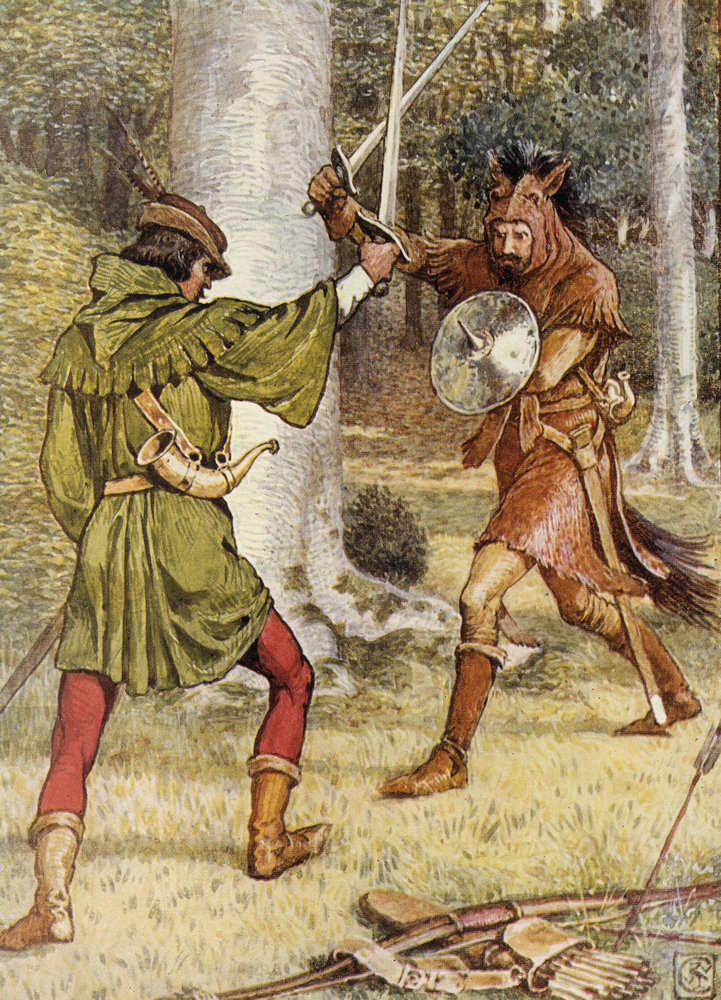 Was Robin Hood a real guy? Almost certainly not! But his ever-changing story is a fascinating reflection of the time periods he passed through. Let Demetria and Isaac take you on a journey through time, from the far past… to the distant future.

Want to read some Robin Hood stories? You can find them here:

A lovely version of Robin Hood and the Monk, one of the oldest Robin Hood stories. (Video Source) You can follow along with the lyrics here. Note how violent and brutish Robin and his gang are in this version of the story compared to later retellings! The monk and his little page are murdered by Robin’s men. The men on the walls, the porter, and the jailor all meet sticky ends.

Erroll Flynn and Basil Rathbone swashbuckling in one of cinema’s most iconic scenes. (Video source)

The beginning of Disney’s Robin Hood. While the rooster’s name is Alan-A-Dale in this version, his original concept comes from Disney’s scrapped Chanticleer project, in which Reynard the Fox would have been the villain and Chanticleer the Rooster would have been the hero. There was also a planned Reynard the Fox feature film in the works at one point, but it was also abandoned. Disney then attempted to combine the two into one film with Chanticleer and Reynard, but never finished that either. Alas, Reynard seems to have been permanently shelved as an unsuitable hero in favor of kid-friendly Robin Hood. (Video source)

A clip from Robin Hood: Prince of Thieves, a 1991 adaptation notable for Kevin Costner’s difficulty speaking with an English accent. (Video Source)