This week: war in the Ashikaga age. Plus; the reign of Ashikaga Yoshimitsu is generally considered the zenith of Ashikaga prestige, but why was his power built on such shaky foundations? Once the Ashikaga had seized control of Japan, how did they go about actually governing it?

Grossberg, Kenneth. Japan’s Renaissance: The Politics of the Muromachi Bakufu. 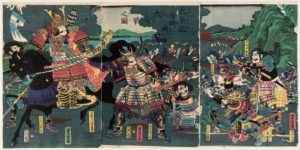