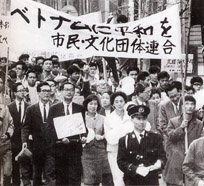 This week, we’re looking at a very different kind of 60s protest movement: an attempt to build a cross-sectarian, non-ideological movement to oppose the American war in Vietnam. How did the anti-Vietnam War movement emerge in its Japan, and how did it simultaneously grow to a massive size and fail to have any appreciable political impact?