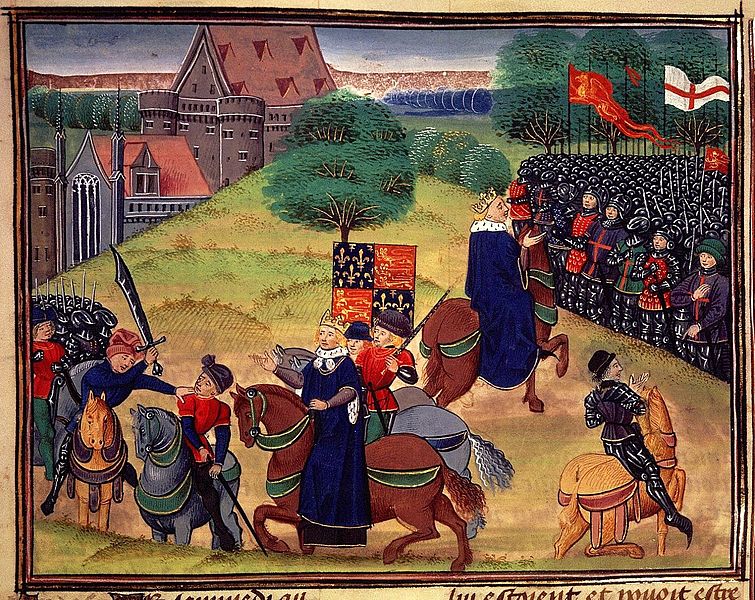 The peasants are revolting! Bad times for England, but good times for Demetria and Isaac as they talk about boy kings, bad tax plans, and what to do when a bunch of rebels politely ask you to kill your own uncle.

(Corrections: Isaac is not at all correct about the time period of Joan of Arc, and has mixed up boy king Richard II with boy king Henry VI. Also, I screwed up and forgot a Charles, there’s a Charles VII between Charles VI and Louis XI. Confusingly, some people in Charles VI’s life are referred to as Louis I and Louis II. We were on a lot of cold medicine while recording this, which did not help matters.)

Featured Image: The Death of Wat Tyler, painted some time between 1385 and 1400 (Image source)

The most famous portrait of Richard II, in Westminster. (Image source)

John Ball giving a sermon to the rebels. (Image source)

This manuscript page was described as “Richard II meeting with the rebels” but I think it may actually be that time he wouldn’t get off the boat. (Image source)

A much later and more sympathetic portrait of Wat Tyler by William Blake. In some versions of the story, Tyler strikes a tax gatherer who tried to rip his daughter’s clothes off. (Image source)